I’ve always had since the beginning of the game a love and hate relationship with being in Guilds. So many of them everywhere, the real good ones are few and far in between and always hard to find a good one to settle into that fits your style of play. Sometimes you have to help build one from scratch. If guild drama don’t get you, raid drama or a guild member you cant stand then the GM will eventually do you in I guess.
So my day off today, been a bit busy working so haven’t logged on much last few days. So logged on my Paladin and found over half the guild gone. So thought that’s odd, had more people last time I was logged on. Looked at the guild log and yeap it was mass desertion! So first thing I though drama maybe. Was only one other person logged on in guild to even ask if anything what happened. No response! So saw another fellow former guild paladin right there in Dalaran that I remembered from one guild OS raid. 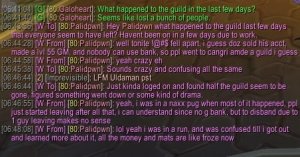 I had gotten the guild invite to the guild by the GM when I was thinking about it not long ago. It took me a week to decide before joining the guild. Thats how much I hate joining guilds that I can think about it that long because I hate leaving just as much also. Seems the GM who also had several high level alt characters that was Naxx 25/Ulduar raid geared sold his entire account and cashed out and replacing the GM with a lower geared character it seem and with the GB on lockdown so no one can remove anything either. At least that what I was told and how I understood it. Confusing that is as well the details of it all.

Seems few to no one in guild knew what was happening and caused all kinds of drama after and people started quitting. They was already some tension in the guild as was revealed to me by one guild member due to the lack of regular scheduled raids or people not showing up as scheduled and that was a source of some tension. Some didn’t get raid invites either just from being logged on and seeing how conversation flowed during raid time in guild chat. As well some people getting carried through 25 man raids as fresh 80 to get geared up and their alts as well. That was rubbing some other members. That’s just what I was told since I barely done any big raid with any of the new guild due to time and my schedule. I did one or two 5 man Heroic runs with a few member and a OS raid at most.
Stuff like this SUCKS! Stuff like this you read happen to other people on other blogs you read. So it sucks when it finally happen to you in this case me. But then it makes for stuff to write about in “My Life and Times…” Oh well AS THE WORLD TURNS in WoW. Kinda like the daytime Soap Opera’s.
/guildless
Oh well in the twist and turn of “My Life and Times” might as well call it and say raiding as well is over for the summer at least or any good attempt at it for a while. As well finding a new guild right now either. I  can use less drama not more of it. So just a good time to focus on leveling the new Alt, stack up on some Emblems of Heroism, knock out stacking up on Champion Seals for the coming patch 3.2 and whatever else can pug as it comes up. At least I can afford any repair bill without any worry if have to pug  which is just about normal for me.
Back to guildless in WoW. Quiet days are here again and so goes “My Life and Times”…..
Can you imagine playing WoW without the drama that goes with the game?