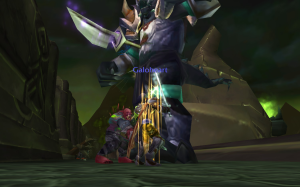 If you don’t know. Screenshots is a regular feature of this Blog as I love to post screenshots of interesting ones and the event in which they are captured as such.

You know a Paladin can have a lot of fun as well as a Protection Paladin. We may not have ubar DPS like Mr Mage or Warlock but we can sure do stupid stuff and survive and have fun. While doing the collection quest for the Ata’mal Armament for Shattered Sun Offensive (SSO) at the Black Temple decided instead of avoiding running into the Shadowsworn Draknoids while on the quests as they kept getting in the way. When Questing I always use my Petrified Lichen Guard Shield as its Always in my Bag, love it! Also cost less to repair than a Epic Shield too. So decided to just put a beating on these NPC’s whenever they showed up on patrol and while AoEing Shadowmoon Slayers. Even got one when I had a group of about 8-10 Shadowmoon Slayers in AoE. Just judge Wisdom, Consecrate and when it was over I still had over 50% health. Awesome, got to love survivability like a Porcupinefish.

So while looting all the mess. It dropped a Epic piece, Blade of Wizardry. Hmm I thought, wonder what else they drop? So for the next 15-30 mins went and killed everyone I saw in sight, was a Blast! Some won’t drop much but the Loot tables for these NPC’s have a lot of Random Enchanted lvl 67-69 Green gear. And very good green gear that is as well as lots of Blue gear, cards, tomes and more. I picked up about 4-5 pieces of all Randomly Enchanted Boneshredder gear of random name. Boneshredder Claws of the Tiger, Boneshredder Gloves the Bandit etc. Yeah I got a few as well as some scrolls.

What was funny no joke, was watching another Paladin with a shield runaway from one of these NPC’s. The Paladin actually ran away as the NPC was still alive. So what did I do? I sat there drinking for mana and chew on some food right there in his path and waited for him to come to me. Yeah can be fun to be a Protection Paladin. But make it fun is what I say.

These things are on Farm Status for me just for the fun of it and whenever I get Bored. They have lots of Loot. My Motto: Kill everything if in doubt, but that’s my motto and works for me, never know what’s going to drop i’ll say. Maybe a Epic!

So the Epic Blade sleeps in my Bank for an Alt maybe. Yeah I can sell it, but I don’t need the cash. Really I don’t. Will keep it for an Alt for now.