Another few Steamvault run with some friends and Warlord Kalithresh is getting so tired of seeing Galo he finally dropped my much needed Devilshark Cape for tanking. However he’s still keeping a grip on that chest piece that I still need from him. Will see how long it takes to get it or the one from Mech. Have the enchant materials to get +12 Dodge put on the cape just haven’t found a enchanter as yet to smack it on the cape. Also picked up my Kara Key frag in Arcatraz, so be off to Black Morass later to finish that part of the Key Quest. 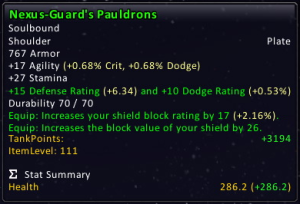 Though working towards getting the needed shoulder piece Spaulders of Righteous from Botanica whenever it decides to drop, did a quest in Netherstorm and picked up a nice green shoulder piece. Got the Nexus-Guard’s Pauldrons from a not too long relatively easy chain quest takes about a hour or less. The quests starts at Midrealm post in north Netherstorm. Its one the huge bubble domes of the Consortium and speak to Mehrdad. Shoulders got some nice shield block rating and block value which I can sure use. I put the Scryer Shoulder enchants on then for +15 Defense/+10 Dodge that gave me 2% more block than what I had before and a bit short of 1% more dodge altogether than before. Small increases makes a big difference until I can get the gear drops I need and faction revered rewards to uncrushable.