One of the things i like about Paladins is the ability to Melee. I like weapons versatility as a Paladin in both 1 & 2Hand Weapons use. Leveling up in Azeroth Galo used both interchangeably even as Protection Spec. Yeah, i used the shield and board most the time. But some mobs was just fun to pound on with a 2H quickly. Since in Outland all i have used mostly is my 1H and Shield as you never know what you will run into to fight here. So some my weapons skill have been neglected a bit. I hate to neglect my skills or profession skill all the same. Decided to level up all my skills i have neglected to maintain for weapons versatility.

I was in TB (Thunder Bluff) to turn in my 60 Morrow Grain herbs i have grow at various time for TB reps. So that net me 450 more reps with TB. Mostly i just do it for fun with new herbs even if its lower level ones. I take the reps too. So after that been close to Un’ Goro i headed there to level up my neglected weapons skill on the fast hitting Raptors there and since there are also lots of them there to do it fast in AOE grinding for fun. 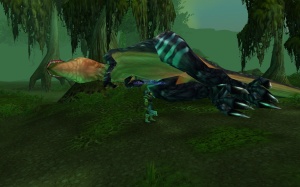 Was a heck of a lot of fun, no XP but just fun. First off was retribution on the Devilsaurs. They had made my life hell when I was there and with that damm fear spell have you running around.

Retribution is a Bitch sometimes when it comes back to ya! 2H Sword leveling up skills.

Nothing special about fighting here really. But did have to level up my other weapons skill from around 250 average level on all my 2H Weapons and a 1H also. Chuck a Intelligence pot for +25 for high intelligence and buffed BoK for 10% to all stats, mostly for the extra intelligence also to fasten pace of learning any weapons skill. Need high Intelligence. AOE the raptors in groups and leveled up my skills on all those weapons i needed to. Last thing remained was to level up “Unarmed Weapon” Skill from around 200 or so. I find some mobs do disarm you and last thing i need is to have low skill on disarming or in a instance.

So what’s special is that I was fighting well …..unarmed the entire rest of time on all the raptors. a Few people passed by and wondered what the heck i was doing or taking a while to kill some of them when i first started. Was funny, so just kept on sparring, jabbing & punching. I was thinking of Movie “Fight Club” then. I was liking this. No weapons, just me and my Fist of Reckoning against the raptors and in AOE too.

When i was close to finishing up here i decided to go and have some fun on the Gorillas….. unarmed in the cave. Was FUN! You know a Paladin can do everything in AOE he can do with a actual weapon in hand. He may not be exactly 1.5 speed as some weapons, but he is fast enough to AOE some mobs and have Reckoning procs allot. You do all the same spell damage you normally do with exception of what the weapons my have on it normally. You still block and dodge everything else as normal. My hand damage was pretty low, something like 50-90 or so but my spell damage was not. So i just did SOL & Crusader the whole time. Light for the healing and crusader to speed up the attacks to level the skill faster on constant hits. Reckoning proc’s allot and my “Mark of the Chosen” trinket i still wear proc’d constantly for +25 to all stats. Woot!. Works nicely. However was no XP gain here for me due to level. Was just for fun to level the skill. But i got lots of raptor flesh which i put on AH, since no one in guild needed any.

Headed back to HellFire Peninsular. Needed to level up skill some more on my Polearm also. Grind up safely doing AOE on the Buzzards around HellFire area. Popped a Elixir of Draenic Wisdom for +30 Intelligence and went sparing again on the Buzzards. Fight Club Baby! Killed some Hell Boars in between since they were around …Unarmed. Did all there Buzzards spots just for variety so not to be bored sparing unarmed on Buzzards. Yeah i had some lookers too wondering just what the heck is a Paladin doing without a shield or weapon. Hahaha that’s always funny to other people stopping to watch when they drop in kill their Buzzards and you still sparing away on same one or group. Paladin having Fun!!

This got me thinking. I’ve heard of a Hunter who leveled entirely Melee from 0-70 good grief, but fun he must have to do it that way though unusual. So i thought how would a Paladin fare to level up to 70 completely “Unarmed”. That would be just crazy to see someone do that. But i no doubt paladin may be King of the ring in Unarmed Fights, now that’s something. 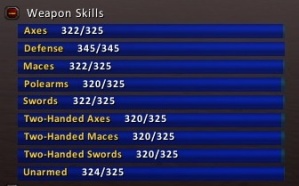 So in the end of working on my neglected Weapons Skills and liking versatility in using different weapons or for different stats or effects. I say I’m pretty well trained up to switch to any weapons i need to use effectively. I can BOE and use if i picked up something really nice in a instance at that if i ever do.