Asked a nice friend in game if she can help me with the quest. A lvl 70 Paladin, ended up with 3 lvl 70 of her friends giving me a hand on the quest which seem more than enough firepower to say the least. We had a Mage, Shaman, a Holy Paladin and myself. We then headed to Eastern Plaguelands and then into Stratholme.

We didn’t enter Strat through the regular front door of instance, as it seem we took a back or side door entrance into the place and the Chapel was close by as it seem like first building on my right from the side entrance. Not sure if someone used a key but i suspected so. The Mage & Shaman cleared the way to the chapel easily killing everything and was just like that i was inside and extinguished the flame burning there. Was a Elite Paladin standing there with the blue ? and after i extinguished the flame he said some stuff at that and then he attacked and we down him easily since it was a few of us. After that several other Elites rushed through the entrance and attacked us but the mage and the shaman had it all covered and i really didn’t had to do much there barely got 2 hit off on the sword. After that i got the complete quest completion notification for extinguishing the light flame. Great!

I’ve never done Stratholme Instance or the few before it so this was just GREAT! Good opportunity to see how lvl 70’s play and well i get to run the instance. You got to figure with getting to Outland at 58, who attempts to runs these instances anymore? Not much of anybody i can think of. I never hear in trade, looking for group for Strat. So we killed lots of undead everything and lots of undead in mass groups and these were lots of elites also. Undead have a lot of Runecloth to say the least too. I got to consecrate allot, and cast demon Exorcism and Wrath Spells to knock out undead in masses, with lots of floating yellow numbers everywhere. WoW! The Mage and Shaman did allot of chain killing and it was cool to watch. There was lots of BOP blue pieced everywhere, too bad nothing i can ever use much as we passed on them. We got many pieces as BOE and i did not win the roll on much of those. All the BOP i passes on. Did get a few blue pieces and a Priest codex i will keep for the Alt Priest. 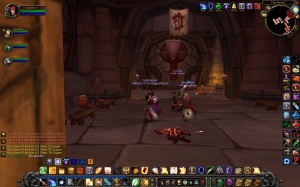 We killed lots of Scarlet Crusaders in Strat going through hidden doors everywhere. Mage had the key for the doors. A key dropped for strat i guess, we rolled and no luck getting it. Maybe when I’m 70 i come back and kill undead Protection Paladin Style in Strat. I did get lots of Argent Dawn rep points for all the kills, and some experience points also at 60, just too bad i was not wearing my Argent Dawn Trinket, Duhh! It was in my bag too. Again picked up lots of Runecloth everywhere. We got to a chamber the mage entered and fought some guy, he seemed to be really tough. The mage fought him since the shaman had left, the holy paladin healed and i backed up healed Flash of Light from outside chamber. First time i ever really did so much support healing or spammed Flash of Light. The guy was on low health, mage was low on mana, the guy turned into a big demon and i went in consecrated and casted Exorcism and after 1 or 2 other spells he was dead. We downed the boss guy, i didn’t even know it was the boss since i was healing the mage before, i barely looked to see. Cool. We owned Stratholme!

The mage port the remaining 3 of us out the instance to Shatt, and then i took the portal back to Silvermoon and head to the paladin trainer to see the boss lady for the quest and i got about 8300Xp, New Summon Spell, All Riding Skills for 150 & the Paladin’s Blood Knight Tabard. WOOT!! Yeah!! I feel like a real Paladin now somehow. I tried out the new Epic Mount with the new spell and its alot faster, even glows a bit too. I decided to wear my Blood Knight Tabard as its my right of passage as a Paladin and proud to wear it. I think i will just keep wearing it vs wearing my guild tabard for a long while… who knows till when. It was a good right of passage to earn it the Epic Mount, Blood Knight Tabard at least i took hits to get it.

Edit: Some day soon i will revisit Stratholme if not to get that Key also. But it would be nice as a challenge to solo it. Some people seem to get bored at 70, soloing stuff may seem fun just to do as a challenge in Epics.